March 19, 2018.The market traded last week in a random way, without a clear direction. On the one hand, investors have refused to respond to the political machinations playing out from one day to the next; on the other, positive news, that will pique buying pressure, doesn’t seem to be anywhere on the horizon. To cap off the week, even though the market recorded losses, technically, themarket has continued its uptrend after the latest bottom produced in February.

The bears are trying to back up their call for a sell-off based on the chaos they see unfolding in the Trump White House, senior officials going like flies. Of course, the bears also contend that chances of an international trade war have been on the rise. The indexes, though, don’t seem all too worried, investors – like in the TV show, “The Apprentice” – not caring one way or the other who will be next to be tweeted out of a job.

The good news is that the S&P 500 has slipped lower to the area of the 50-period EMA, and is now at extreme sold levels, the prospects being good for a rebound. The road most traveled on the market continues to be to “buy the bad news.” When the import tariff was announced – sparking fear of a trade war – we saw a few beautiful examples of the phenomenon of “buying the bad news.” The formula on Wall Street is very clear: bad news = fuel for gains.

As of now, the market is in a bind, devoid of any significant news to which it can respond, meaning that the market is spinning its wheels, yet staying in place. The bears are trying very hard to be persuasive that the market’s in for a cold spell but there are too many market players primed and ready to buy into each and every correction. They’re not worried in the least about the long laundry list of negative factors that the bears have been touting already for quite some time.

The Fed is expected to hike rates for the first time this year on Wednesday, investors expecting greater clarity as to whether the central bank expects to stay true to its current projection of 3 rate hikes this year – or up it to 4.

This coming week, the Fed is expected to be the driving force behind the market, investors continuing to keep a watchful eye on Washington, looking to be the first to know about any new economic or geopolitical shock from the Oval Office, and alternatively, any new trade development.

Besides the Fed, a number of economic reports will be released, including existing home sales on Wednesday and durable goods orders on Friday.

This week’s earnings reports will include Oracle (ORCL) on Monday, FedEx (FDX) on Tuesday and Nike (NKE) on Thursday.

In summary, there’s a ton of news on the market’s agenda this coming week, and it could be that the market will find something to respond to. At the same time, it’s important to understand that the market tends to buy any newsworthy event that prompts a price correction. In the event the market opens down this coming week against the backdrop of a Trump-related event, buyers will jump on the opportunity, buying up stock as quickly as they can. They’ve learned the lesson well, i.e. that negative developments have no effect in the long-run. 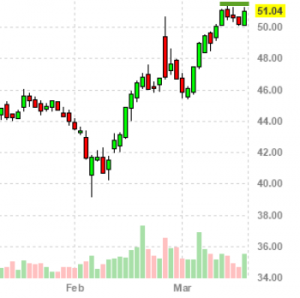