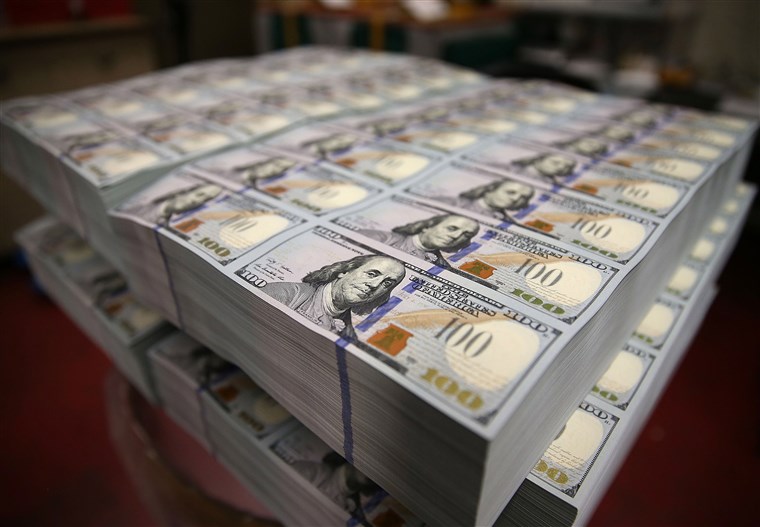 US stock futures fell modestly in cautious trading this morning, as investors marked time until the Fed’s interest rate decision, at 2pm.

The Federal Open Market Committee, the Federal Reserve's policy-making body, is expected to cut interest rates again today, by a quarter-point for the second time this year, and possibly move further to calm the overnight lending markets.

Government bonds climbed from London to Tokyo over recent hours, before the expected easing, after the Federal Reserve was forced to conduct a repurchase operation, the first such move in a decade; injecting more than $53 billion in cash into the funding markets.

Repurchase agreements are the ‘grease’ that keeps the financial system wheels spinning, allowing different market participants to borrow and lend to each other to cover short-term cash needs.

On Tuesday, the so-called repo rate soared to a historic peak of 10%, when it typically trades in line with the Federal Reserve’s target interest rate of between 2% and 2.25%.

The Fed is scheduled to repeat its overnight repo operation later again today, adding to market jitters as to what Powell and his colleagues are likely to say about future rate hikes, and the unwinding in the month ahead of the Fed's $3.8 trillion balance sheet.

It is unclear how long the market intervention will last. The solution, according to some longtime observers, would be for the Fed to continue to inject cash into the financial system on a regular basis.

These developments come after Tuesday’s session, where the S&P 500 fluctuated between gains and losses, but steadied to finish +0.25% higher, after the Energy sector (-1.39%) retreated, as investors assessed a positive report on bringing Saudi’s oil output back online.

Ahead, in today’s economic calendar, Wednesday includes; Building Permits and Housing Starts for August at 8:30am EST, followed by Oil Inventories for the week ended Sept. 13 at 10:30am EST.

In earnings, General Mills (GIS) and Herman Miller (MLHR) are both amongst the major companies scheduled to report today.

Economy: Fed’s First-in-a-Decade Intervention Will Be Repeated Wednesday. (Bloomberg)
The Federal Reserve took action to calm money markets, injecting billions in cash to quell a surge in short-term rates that was pushing up its policy benchmark rate and threatening to drive up borrowing costs for companies and consumers.

General Mills (GIS): [EARNINGS] Beat estimates by 2 cents a share, with adjusted quarterly profit of 79 cents per share. Revenue came in short of forecasts, however. General Mills said it saw improvement in North American retail sales and in its pet unit, although other segments got off to a slower start for the new fiscal year.

Lennar (LEN): [DOWNGRADE] Downgraded to “sector weight” from “overweight” at KeyBanc. The firm feels Lennar has limited valuation upside, with both negative and positive factors now balancing each other.

Whirlpool (WHR): [DOWNGRADE] Downgraded to “sector weight” from “overweight” at KeyBanc, which cited weakening earnings momentum for the appliance maker.

Southwest Airlines (LUV): [GUIDANCE] Said it is experiencing solid demand and is maintaining its current-quarter revenue forecast, even as it continues to deal with the grounding of its Boeing 737 Max fleet. It also expects expenses to increase by less than it had previously anticipated.

Amazon.com (AMZN): [NEWS] Unveiled a high definition version of its Amazon Music service, the first major music streaming service to do so. The new service will cost $12.99 per month for Prime members and $14.99 per month for non-members.

Facebook (FB): [NEWS] Is partnering with Luxottica to make augmented reality glasses. The glasses are designed to replace smart phones, with Facebook hoping the partnership will allow the glasses to hit the market in the 2023-2025 time period.