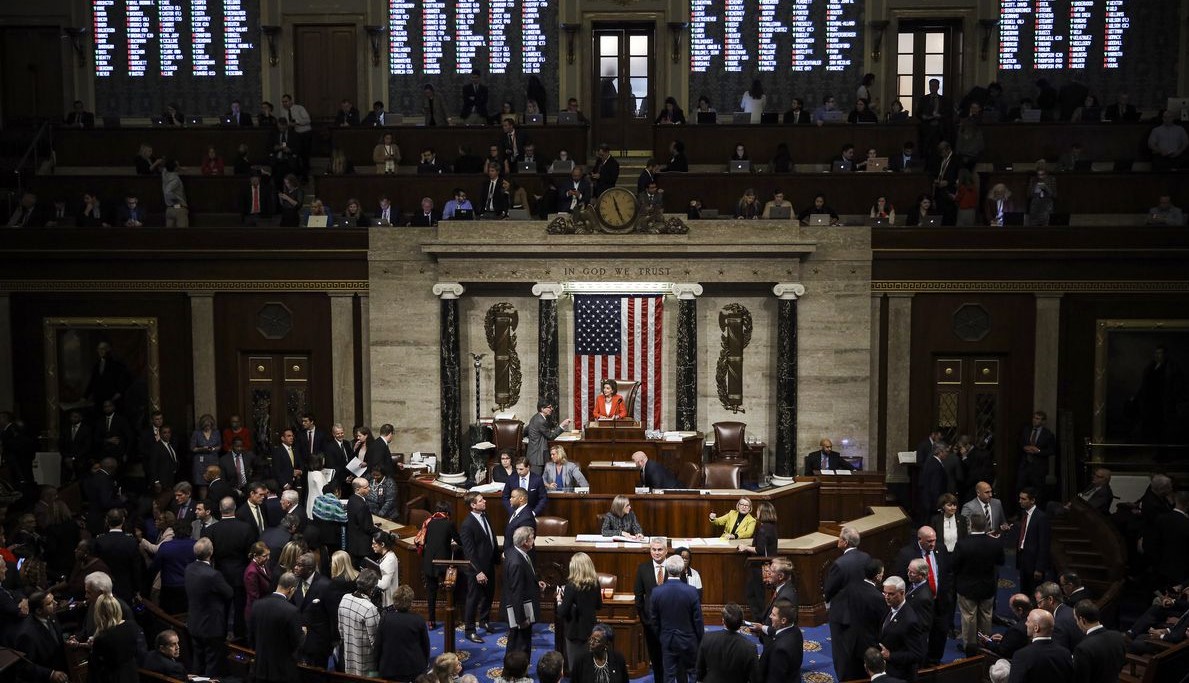 US stock futures were posted higher on Thursday, a day after the House of Representatives voted to impeach President Donald Trump for abuse of power and obstruction of justice.

The impeachment has had little effect on stock prices as it's widely expected that the Senate won't vote to remove Trump from office.

This development falls during a period rounded growth in this year’s record-breaking equity rally, as details on the recent US-China trade deal remain vague, positioning investors in a hold-and-wait pattern.

These developments come after Wednesday's session, where US stocks ended narrowly mixed, having nudged a small fraction higher, as a dimmer outlook from FedEx (FDX -10.03%) damped investors’ optimism over the economy.

Ahead, today’s economic calendar includes; Weekly Jobless Claims and the Philadelphia Fed Business Outlook Survey for December at 8:30am EST, followed by Existing Home Sales for November at 10am EST.

TODAY'S TOP HEADLINES
Politics: House Votes to Impeach President Trump. (The WSJ)
The House impeached President Trump in a momentous set of votes late Wednesday, making him the third president since America’s founding to face a Senate trial, and laying bare the deep partisan divisions on Capitol Hill and across the country.

Herman Miller (MLHR): [EARNINGS] Beat estimates by a penny a share, with quarterly profit of 88 cents per share. The office furniture maker’s revenue came in below analysts’ forecasts. The company said its results were impacted by lower-than anticipated order levels in an uncertain economic environment, although it added that profit came in at the higher end of its forecasts despite those difficulties.

Seattle Genetics (SGEN): [NEWS] The drugmaker won US approval for their experimental drug to treat advanced bladder cancer, the first such drug to win Food and Drug Administration approval.

Conagra Brands (CAG): [EARNINGS] Beat estimates by 6 cents a share, with adjusted quarterly earnings of 63 cents per share. Revenue topped estimates as well. The maker of food brands like Birds Eye, Healthy Choice, and Vlasic also raised the amount of cost synergies related to its 2018 acquisition of Pinnacle Foods.

Micron Technology (MU): [EARNINGS] Reported adjusted quarterly earnings of 48 cents per share, a penny a share above estimates. The chip maker’s revenue came in above Wall Street forecasts as well. Micron said the current-quarter would represent the bottom of what’s been a difficult period for the memory chip market. The news is also giving a boost to other chip stocks like Western Digital (WDC) and Nvidia (NVDA).

Darden Restaurants (DRI): [EARNINGS] Earned an adjusted $1.12 per share for its latest quarter, 5 cents a share above estimates. Revenue was slightly below forecasts. Sales at restaurants open at least a year rose 2%, in line with analysts’ forecasts.

TiVo (TIVO): [NEWS] Will merge with technology licensor Xperi (XPER) in a stock-swap deal. TiVo shareholders will own about 53.5% of the combined company.

FactSet (FDS): [EARNINGS] Beat estimates by 16 cents a share, with quarterly profit of $2.58 per share. The provider of financial information services saw revenue miss forecasts. The bottom line was helped by an increase in profit margins.

Boeing (BA): [REVIEW] Boeing’s debt rating was cut one notch by Moody’s, as the grounding of the jet maker’s 737 Max aircraft continues. Moody’s said it sees long term risk to Boeing’s reputation following its move to suspend production of the jet in January.