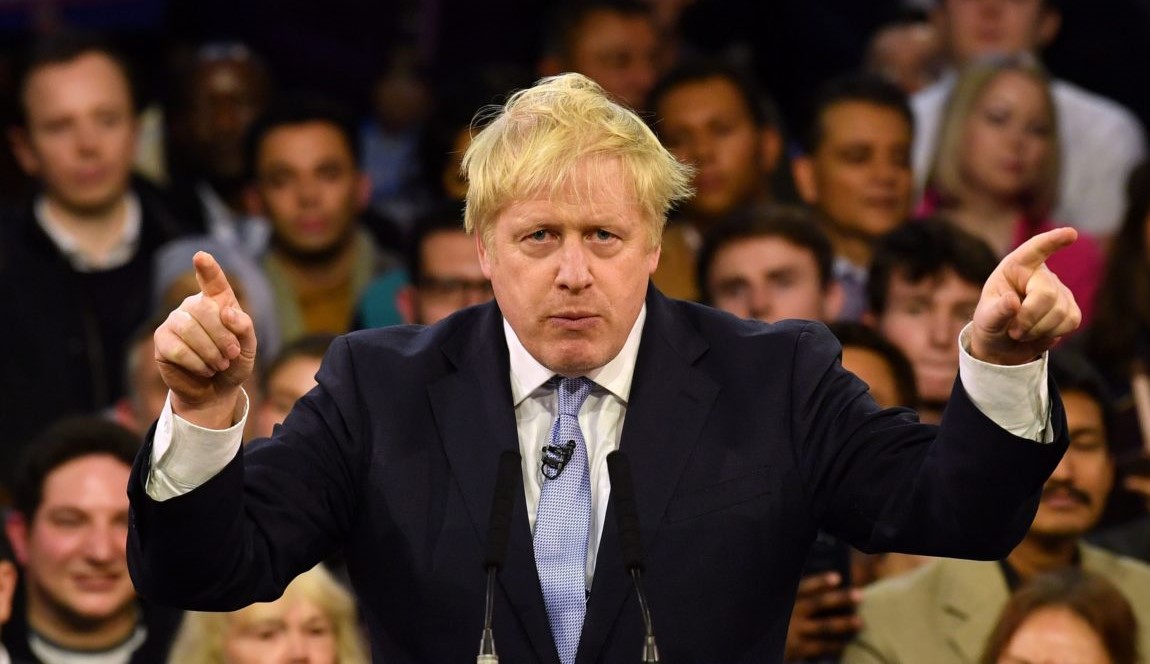 US stock futures powered further into all-time highs on Friday, as signs of progress in resolving two major financial market overhangs, namely; US-China trade negotiations and a political gridlock in the UK, bolstered optimism in what has already a banner year for risk assets.

Investors poured into stocks and sold out of government bonds, figuring that prospects for corporate profits and economic growth were instantly brightened by these developments.

Multiple sources had reported that Donald Trump is prepared to suspend tariffs on China-made goods that were set to kick in on Dec. 15, and roll back levies put in place over the past 18 months, in exchange for a $50 billion US agricultural purchase commitment.

The phase-one trade agreement is expected to be announced as soon as Friday, according to people familiar with these plans.

Elsewhere, the pound leapt higher over Boris Johnson’s emphatic Conservative election victory, its largest in 30 years, and redraws the political map of Britain to gives the Johnson the mandate that he needs to pull the UK out of the European Union in less than two months.

These developments look to help extend upon yesterday’s advance, where the S&P 500 (+0.86%) recorded a new closing high, after Donald Trump spurred investor hopes a “BIG DEAL” on trade.

At 9:35am on Thursday, the president wrote in a tweet; “Getting VERY close to a BIG DEAL with China. They want it, and so do we!”

Ahead, in today’s economic calendar, Friday includes; Retail Sales and Import and Export Prices for November at 8:30am EST, followed by Business Inventories for October at 10am EST.

TODAY'S TOP HEADLINES
Politics: Johnson Wins Crushing Majority in Election That Upends Britain. (Bloomberg)
Boris Johnson won an emphatic election victory that redraws the political map of Britain and gives the prime minister the mandate he needs to pull the UK out of the European Union next month.

China & Trade: Trump’s China Deal Flirts With the Curse of a Phase One and Done. (Bloomberg)
President Donald Trump is expected to formally present an interim deal with China as soon as Friday that will avoid further escalation of a trade war that for almost two years has hung over the world’s largest economies and thus almost any country or company doing business with them.

Sarepta Therapeutics (SRPT): [NEWS] Received an early Food and Drug Administration approval for its second treatment for Duchenne muscular dystrophy. Sarepta will still need to conduct a trial to confirm the drug’s benefits, which it said it expects to conclude by 2024.

Adobe (ADBE): [EARNINGS] Reported quarterly profit of $2.29 per share, 3 cents a share above estimates. The software company’s revenue was slightly above forecasts as well. Investors were encouraged by Adobe’s ability to maintain a revenue growth rate above 20%.

Broadcom (AVGO): [EARNINGS] Beat estimates by 4 cents a share, reporting quarterly profit of $5.39 per share. The chipmaker’s revenue also exceeded forecasts. Broadcom said it was benefiting from strong demand for 5G-related chips as well as software unit growth. Broadcom also raised its target dividend by 23% to $3.25 per share for fiscal 2020.

Snap (SNAP): [UPGRADE] Upgraded to “outperform” from “market perform” at JMP Securities, which cites optimism about Snap’s ability to grow its user base.

Costco (COST): [EARNINGS] Came in a penny a share ahead of estimates, with quarterly profit of $1.73 per share. The warehouse retailer’s revenue came in below forecasts, however, due to a slowdown in e-commerce growth.

Lyft (LYFT): [NEWS] Has begun offering car rentals through its app, with the service initially available in the San Francisco Bay area and in Los Angeles. The news could impact shares of car rental companies like Hertz Global (HTZ) and Avis Budget (CAR).

Tapestry (TPR): [NEWS] Said Kate Spade CEO Anna Bakst will depart at the end of 2019, after less than two years on the job. Same-store sales at the handbag maker have been falling since Kate Spade was acquired by Tapestry – then known as Coach – in 2017.