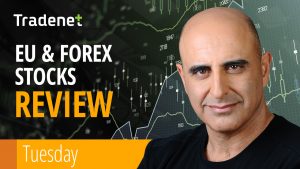 The dollar index traded mostly sideways as investors move into the JPY and CHF following the looming trade war between the US and China. While FX markets traded in narrow ranges, EU and Asian markets traded sharply lower on hawkish comments from US President Trump to impose additional tariffs on 200 Billion of Chinese goods. Despite the move lower in global equity markets metals did not fare well as save heavens and traded mostly sideways while Oil price action was very volatile, trading in a 66-63$ range on the news. The German DAX lost 500 points, 2.5%, in the last 24 hours while the Shanghai composite fell near 3%.

ECB President Draghi speech at 9 am and US building permits at 1:30 pm are the important news on the agenda Tuesday. THE JUNE FX CLASS PRACTICE TODAY AT 4 pm US, 9 pm gmt.