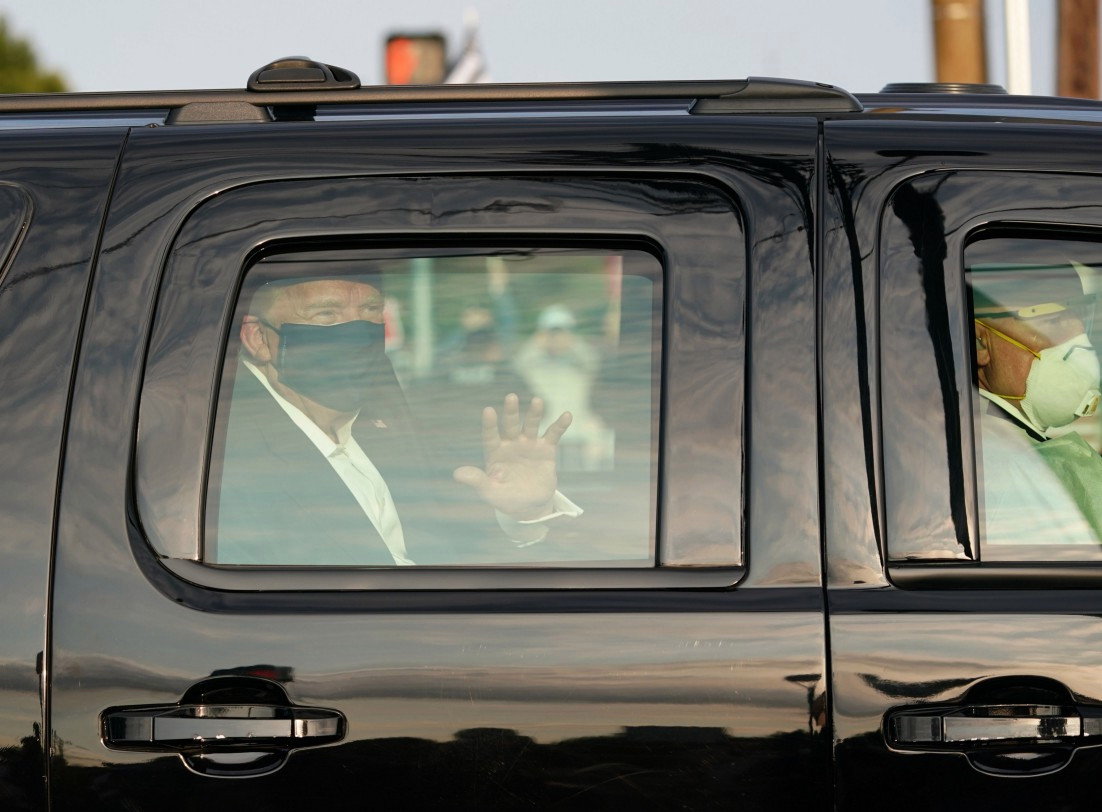 US futures advanced on Monday, amid signs that political uncertainty may ebb following reports that President Trump's health condition is improving, while a new poll suggested a lead for candidate Joe Biden.

Doctors said that Trump’s condition was improving, though had noted that his blood oxygen level dropped twice and that he had taken a steroid, typically given to seriously ill patients, to treat his symptoms.

Uncertainty had rattled markets on Friday following Trump's diagnosis; raising questions about the functioning of the government, the election and the Supreme Court process if the president were to be side-lined.

Meanwhile, a poll conducted by The Wall Street Journal and NBC News suggested a lead for Democrat Joe Biden and the possibility of an undisputed election winner; which would be welcomed by the markets.

Hopes for a stimulus agreement between House Democrats and the White House also gave stock futures a boost after Trump tweeted from this hospital room that “OUR GREAT USA WANTS & NEEDS STIMULUS.”

Ahead, today's economic calendar includes; the PMI Composite Final at 9:45am and ISM Services Index data for September at 10:00am EST.

TODAY'S TOP HEADLINES
Politics: President Trump Remains Hospitalized, Mixed Signals. (WSJ)
President Trump remained hospitalized on Monday after seeking to project confidence and vigor over the weekend, as his doctors offered conflicting signals about how he is faring with the unpredictable illness.

STOCKS IN THE SPOTLIGHT
Pre-Market Movers & News Related Stocks.
DraftKings (DKNG): [NEWS] Announced a public offering of 32 million class “A” shares, half by the company and half by certain selling stockholders. DraftKings will use the proceeds that it receives for general corporate purposes.

Regeneron Pharmaceuticals (REGN): [UPGRADE] Upgraded to “overweight” from “neutral” at Cantor Fitzgerald, which cites a number of factors including the potential growth of allergic diseases treatment Dupixent.

Eidos Therapeutics (EIDX): [NEWS] Announced a merger with BridgeBio Pharma (BBIO), with Eidos shareholders receiving either $73.26 per share in cash or 1.85 shares of BridgeBio Pharma. Eidos had closed Friday at $51.92 per share. The cash payout will be limited to a maximum of $175 million.

Altice US (ATUS): [UPGRADE] Bernstein upgraded the cable operator’s stock to “outperform” from “market perform,” calling it a cheap stock of a solid business led by a “highly incentivized management team.”

AMC Entertainment (AMC), Cinemark (CNK): [NEWS] Rival movie theater operator Cineworld announced the closure of its more than 500 US Regal theaters, as well as its theaters in the UK, and as movie studios continue to delay major releases. The latest is the new James Bond movie “No Time To Die,” originally scheduled for this past April, then delayed until November and now pushed back to April 2021.

MyoKardia (MYOK): [NEWS] Agreed to be bought by Bristol-Myers Squibb (BMY) for $225 per share in cash, or $13.1 billion – a 61% premium to its closing price on Friday. MyoKardia’s lead drug is a treatment for irregular heart rhythms and the acquisition will lessen Bristol-Myers’ dependence on its lineup of cancer drugs.

Navistar (NAV): [NEWS] Major shareholder Carl Icahn is willing to accept a bid of about $50 per share for the truck maker, according to sources who spoke to the New York Post, but may find himself in a battle with board member Mark Rachesky. Volkswagen’s Traton truck, already Navistar’s biggest shareholder, currently has a $43 per share offer on the table and could increase it when it finishes its due diligence shortly. Rachesky has previously suggested that Navistar is worth about $70 per share.

Sony (SNE): [NEWS] Applied for US approval to continue selling its products to China’s Huawei Technologies. Huawei is one of the biggest customers for Sony’s smartphone image sensors. The U.S. government has been pressuring other countries to stop selling to Huawei, accusing the company of passing data onto the Chinese government.

Facebook (FB): [NEWS] Facebook lawyers have prepared a 14-page document designed to rebut calls to break up the social media giant. The document, seen by The Wall Street Journal, said that breaking the company up would defy established law, harm consumers, and cost billions of dollars.

Coca-Cola (KO): [NEWS] Will discontinue production of its Zico coconut water brand by the end of the year, according to a Coke spokeswoman who spoke to The Wall Street Journal. People familiar with the matter told the paper that some less popular versions of Coke and Diet Coke are also under review.

AT&T (T): [DOWNGRADE] Downgraded to “underweight” from “sector weight at KeyBanc, which points to expectations of declining DirecTV subscriptions and a drop in average revenue per user.